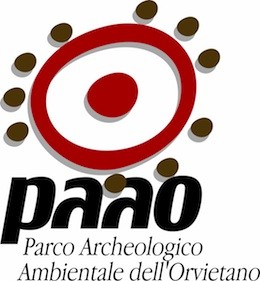 The Archaeological and Environmental Park of the Territory of Orvieto
In collaboration with each other, eight Municipalities in the territory of Orvieto, together with the Superintendence for Archaeological Assets of Umbria, the Region of Umbria and the Province of Terni, have devised the PAAO (Parco Archeologico Ambientale dell’Orvietano or Archaeological and Environmental Park of the Territory of Orvieto), an organism whose objectives are those of safeguarding, making the most of and managing the enormous historical-archaeological and environmental-landscape patrimony that characterizes the entire area of the district.
The municipalities involved are those of  Allerona, Castel Giorgio, Castel Viscardo, Montegabbione, Orvieto, Parrano, Porano, San Venanzo.
Distinct features characterize this far-flung unified area. From the point of view of environment it ranges from areas of volcanic origin with the cliff of Orvieto as the most explicit expression, to the uplands of the massif of Monte Peglia, with limestone deposits cut through by deep ravines. The cultural burden involved is great indeed, for the PAAO deals with all those forms (today defined as demo-ethno-anthropological) of which this highly varied and rich historical reality is composed. Broadly speaking the objectives the bodies supporting the project are pursuing consist in the enhancement of the moveable assets and immoveable property  and the areas of archaeological, historical, artistic, environmental importance; recovery of archaeological and monumental  aspects, historical, artistic and environmental complexes including providing backing for the functions of monitoring and safe-guarding; favoring the integration of humans and environment by safeguarding the anthropological, archaeological, historical and architectural values and the traditional agricultural-woodland-pastoral activities; promoting education, formation and scientific research, including interdisciplinary aspects, as well as compatible recreational activities; promoting assets and areas for tourist purposes; making the most of the human resources and promoting occupation through integrated measures capable of developing the economic and educational values of the area of the PAAO.

This site uses Akismet to reduce spam. Learn how your comment data is processed.